The Most Common Traits of Profitable Physical Therapy Practices?
Skip to content

Do You Know the Most Common Traits of Profitable PT Practices? 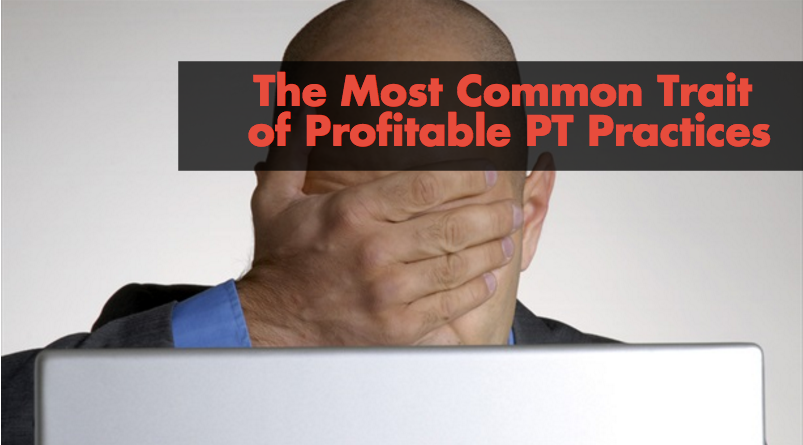 I find it SHOCKING that most PTs don’t know this…especially when it’s so CRUCIAL to running a profitable practice.

If there’s a tough-to-face mistake we share as Private Practice Owners, it’s this one…

But first a quick review of the 4 Mistakes we’ve covered so far:

In Part 1, we covered how most Private Practice PTs are simply looking at their bottom line now and are ignoring healthcare trends and the new healthcare economy. I shared what savvy PTs are doing – transitioning from a physician-referral-dependent model to one attracting New Patients from the General Public and their past patient list.

In Part 2, we covered Dan Kennedy’s Magic Marketing Formula and how it applies to us as Private Practice PTs and how we waste money on marketing and how to fix this.

In Part 3, we revealed the #1 Single Biggest Mistake Private Practice PTs make regarding physician referrals and how I’m averaging 40 New Patients per month from POPTS physicians.

In Part 4, I expanded on my answer to the #1 Single Most Important Marketing System every Private Practice owner should be perfecting if they want to thrive in the new healthcare economy.

And before I cover Part 5, a Quick WIN:

Frank Garza is Breaking His Own Records EVERY MONTH!

This is from an owner, Frank Garza, from Texas, who I shared my Workshop System with:

The highest New Patients we have had per month is about 40 new patients. That was after our very first workshop done back in 2014 in summer. After our most recent one in January we are at 60 new patients already in February. Thats more than what we were averaging in whole month from referrals from physicians. It been crazy to say the least these past three weeks but very exciting at the same time. We’re gonna crush our Monthly visit goal set at beginning of year by the end of this week. Directly as a result of workshops!

Quick Fair Disclaimer: Frank and his wife, Amy, and their staff have worked hard to learn and implement the system. Sharing this story or my results are by no means any guarantee or promise whatsoever that it will work for you.

Anyhow, back to Part 5. The 5th Mistake that Private Practice Owners make:

What Separates The Winners from The Losers: Dan Kennedy’s Answer…

A year or two ago, I went to a high end workshop hosted by Dan Kennedy in his hometown of Cleveland.

The tickets were something like $4,300 for a 3 day workshop.

There were 200 or so of us in the room – entrepreneurs, healthcare professionals, accountants, attorneys, celebrities, authors from all over the world. There to see Dan.

And perhaps the most profound moment from the entire workshop was this… An orthodontist from Kansas City asked Dan:

“When you’re working with a client, is there something you see that lets you know whether or not they’ll succeed with your advice?”

And Dan’s answer, given while the cameras were off was this:

“Sure. They know their numbers.”

He went on to say, “People who do well with my advice and execute and win, they know their numbers. People who fail and blame other circumstances or even me, they have no clue where they’re at.”

And it’s the same in Private Practice.

Great…But How Does This Apply to Private Practice Owners???

The other day, I was talking with a Private Practice Owner who was telling me how poorly his practice was going.

And I listened to about 5 minutes of this before I finally said, “So where are you at? What are your numbers?”

(Quick clarification: ”numbers”, “statistics”, “metrics” all the same language and meaning to me.)

So I followed up with, “OK, how many visits and New Patients did you see this month?”

This particular owner was 2 visits away from an all-time high.

And if he would have known his numbers, I’m sure he could’ve executed one or two successful actions with his staff to hit an All-Time Highest Ever. Just like Frank and Amy did above.

From the experience of talking with hundreds of owners and my own experience as a Private Practice PT, here’s the Levels of “Knowing Your Numbers”:

1.  The first stage is NOT AWARE. This owner will not look at their numbers, ever. When a pathetic effort is made, it’s a guess or they will offer a range. ”we’re about $75 to $83 per visit”, ”we see 30-43 New Patients each month”. This owner is usually very emotional and operates on feel. They’re ignoring where they’re at and their own responsibility.

Quick note: At the least, we should be tracking New Patients, Visits, Income and Attendance on a daily, weekly, monthly, quarterly and annual basis. When I first opened, I didn’t know much but I did know enough to keep track of this in our HANDWRITTEN Schedule Book each night before I went home.

2.  A step up from NOT AWARE is DON’T KNOW WHAT TO DO. This is the owner that looks at their numbers. They’re just clueless as to how they can control their numbers. Often I see the “Looking at Too Many Numbers” syndrome as I did early in my Private Practice career. There’s truth to “analysis can lead to paralysis”. Perhaps more fitting is “100% metric analysis; 0% action”.

3.  The next stage is KNOW WHAT TO DO. This owner puts effort into it. Usually at this stage another staff member assembles their stats. Maybe on a really cool, easy to read dashboard like I use, ClinicMetrics.The owner’s energy and time is reserved for analyzing the metrics and creating plans of action that can be executed, resulting in improving numbers.

4.  The next stage is UNCONSCIOUS COMPETENCE. I stole this from my 4 Levels of Private Practice PT but you get the idea. It’s the owner that’s focused on steady, stable, reliable, consistent growth. The owner and his or her staff, correct problems quickly, keep the entire PT company moving towards and achieving its goals. They know what to do automatically and execute with their team.

POP Quiz: Do You Know Your Numbers? (These answers are for YOU only. No need to share unless you feel the need to)

Last year, what percentage of your new patients were referred by physicians? ____________

So, do you know your numbers?

If you’re looking for more resources, I have two recommendations for you:

Read “Simple Numbers, Straight Talk, Big Profits” by Greg Crabtree. I’m not a big accounting guy but this guy knows his stuff. Very easy read for a topic that’s tough for most of us in the trenches. You can pick it up on Amazon.

If you want to use the same dashboard we’re using here at Madden PT, go to

Hope this helps you crush it,

PS – What blog post would be complete without an invitation to Free PT Training & Webinar ? If you haven’t seen it already I just added two extra times for this week. In it, I share the 3 Big Secrets of how we average 40 POPTS patients per month AND had over 1,050 Direct Access patients in the past year. Plus, I’ll be sharing an new absolutely insane and effective way we’re attracting direct access patients with social media. It’s unreal! You’re going to love it.

How to Get More Patients with Google and YouTube Ads 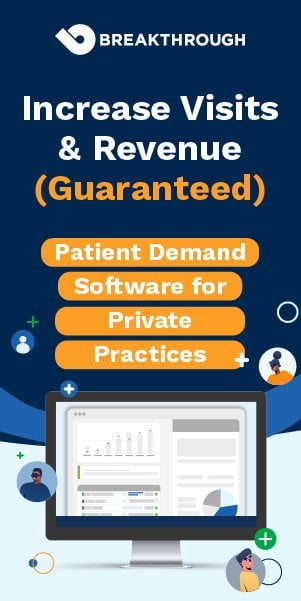